An innovative new major private-public partnership led by Harvard and MIT aims to accelerate one of the hottest and most promising areas of medical research: cell and gene therapy.

“I just think it’s a huge opportunity,” said Terry McGuire, a founder of the venture capital firm Polaris Partners and a member of Massachusetts Life Sciences Strategies Group, a panel of academic, government, health-care, and industry officials. “Clearly, [it] is the next great frontier, and it’s going to be hugely important, both from a research perspective and from a clinical perspective.”

Announced Monday, the project, which will bring the universities together with leading local hospitals, major corporations and state officials, will create a new, as-yet-unnamed center for advanced biological innovation and manufacturing and remove a big impediment to research. The new facility, expected to open by the end of 2021, seeks to ensure that Massachusetts will remain a leading region globally for life sciences.

Recent years have seen dramatic breakthroughs in cell and gene therapy, with new approaches attacking genetic maladies like sickle cell disease by repairing or overriding the DNA mutations that cause them. Cancer immunotherapy, meanwhile, tunes the body’s natural defenses to attack cancer cells to which it was previously blind. Such “checkpoint inhibitors” have had nearly miraculous results, completely eradicating cancers that had shrugged off conventional treatment and spread widely through the bodies of dying patients.

“It’s an incredible thrill to see how basic science research has translated to therapy,” said Arlene Sharpe, Harvard Medical School’s George Fabyan Professor of Comparative Pathology and a pioneer in cancer immunotherapy. “This is an example of how curiosity-driven research is now being translated to therapy because the whole story of checkpoint blockade didn’t come about specifically to cure cancer. It came from understanding fundamentally how the immune system is regulated.”

Stem cells have already revolutionized laboratory science and continue their march to the bedside, while global growth in CRISPR/Cas9 gene-editing technology promises to accelerate progress in an array of fields, making widely available an accurate, relatively inexpensive way to alter the genome, change cellular behavior, and, potentially, that of an entire organism. Work is also advancing on cutting-edge therapies involving oligonucleotides, peptides, and RNA.

“Cell and gene therapies have the potential to revolutionize the global health system,” said Emmanuel Ligner, president and chief executive of GE Healthcare Life Sciences. “We have yet to realize the full potential of any of these modalities [but] there are currently more than 1,000 regenerative medicine trials taking place globally. Recently, in Sweden, the first patient received cell therapy outside of a clinical trial. It’s the start of an incredible time in the industry and in human health.” 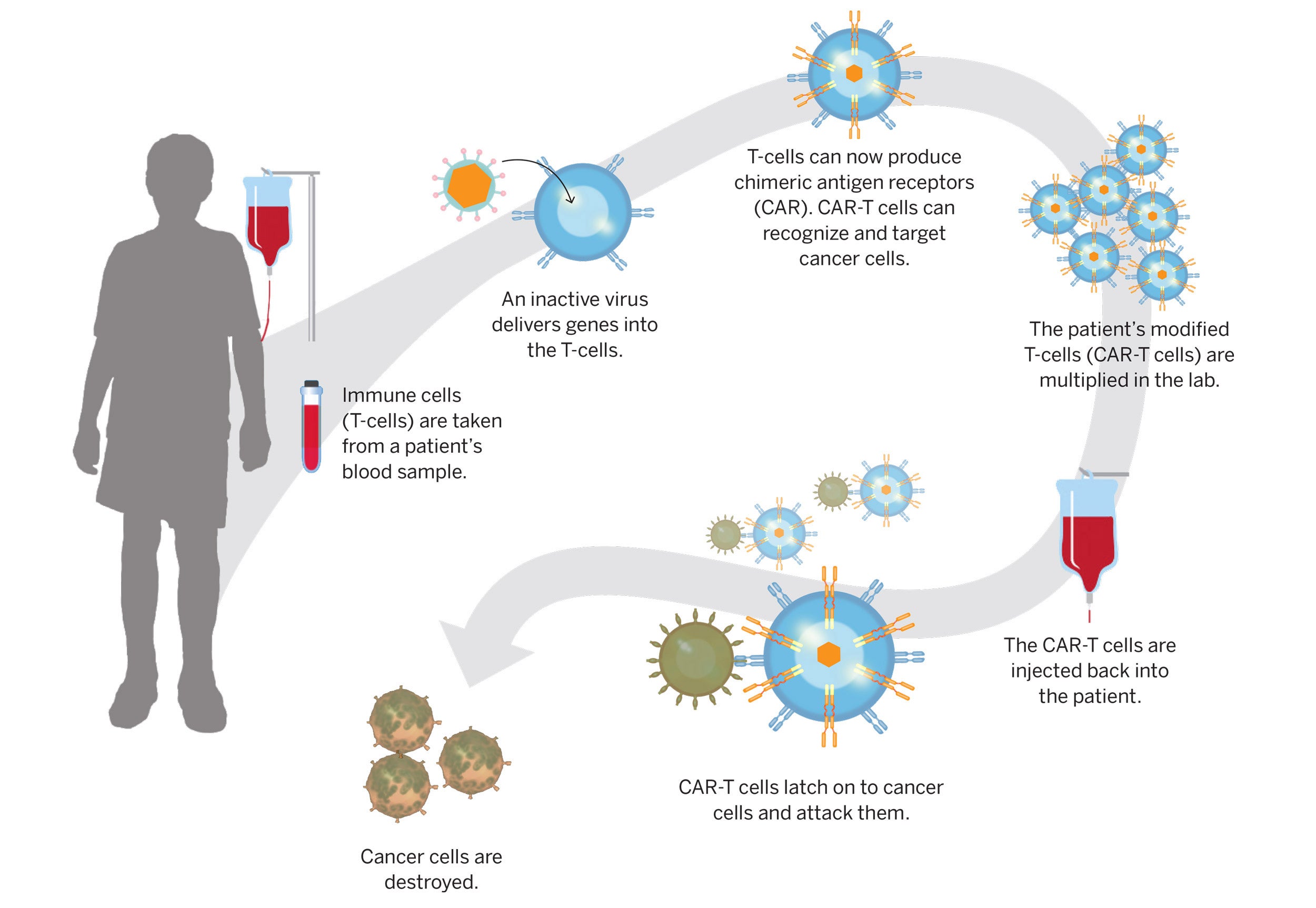 Cells are taken out of the patient’s body, modified in the lab to activate a cancer-finding receptor, then delivered back to the patient.

Each breakthrough raises hopes for a healthier future — especially for patients whose disease has withstood the current arsenal of medicines — but also generates new questions, sometimes revealing limitations in technology and gaps in knowledge. Checkpoint inhibitors, for example, work cancer miracles, but only for a subset of patients. They also carry potentially life-threatening side effects. Stem cells have prompted the creation of an entire field of regenerative medicine but, outside of blood-borne cancers, have been slow to convert into patient therapies.

Work addressing those shortcomings and developing new breakthroughs is slowed by an ongoing shortage of materials. Researchers have to wait up to 18 months for overburdened commercial manufacturers to produce engineered cells and viral vectors needed for their work, slowing the pace of knowledge development.

The new partnership seeks to ease that bottleneck — and give Massachusetts researchers and companies an advantage — by adding cell manufacturing capacity, pioneering improvements to the production process, and fostering advances in the underlying science.

“There’s an incredible need and a major bottleneck in delivery of many of these methods — as well as [high] cost,” said Sharpe, who heads HMS’s Department of Immunology, “so having a nimble facility that’s able to think about DNA, RNA, peptides, cellular therapies is a great thing at this point in time.”

Harvard Provost Alan Garber, who helped conceive of the project more than two years ago and has shepherded it since, said an important benefit will be the community that develops among those from academia and industry, whose work has traditionally been separate.

“The broad question that we were trying to address was, ‘How can we best position our region to be preeminent in the life sciences in the decades to come?’” Garber said. “We have a vibrant life-sciences community, with some of the world’s greatest hospitals, universities, and life-sciences companies of all kinds. We also have a strong financial sector that helps to spawn and support new companies. So the elements for rapid progress in the life sciences — particularly in the application of the life sciences to human health — are all here. But with such a rapid pace of innovation, it’s easy to fall behind. We wanted to make sure that would not happen here.”

The roughly 30,000-square-foot facility will have dedicated manufacturing and innovation spaces. Current models show eight planned clean rooms designed to provide the tight process control necessary to manufacture materials that will be used in human trials. Nearby laboratory space will be reserved for promising late-stage research coming out of academic labs or early start-ups. Leading experts, skilled at refining new concepts for patient application, will provide professional guidance and usher their emerging therapies from lab to patient clinic. 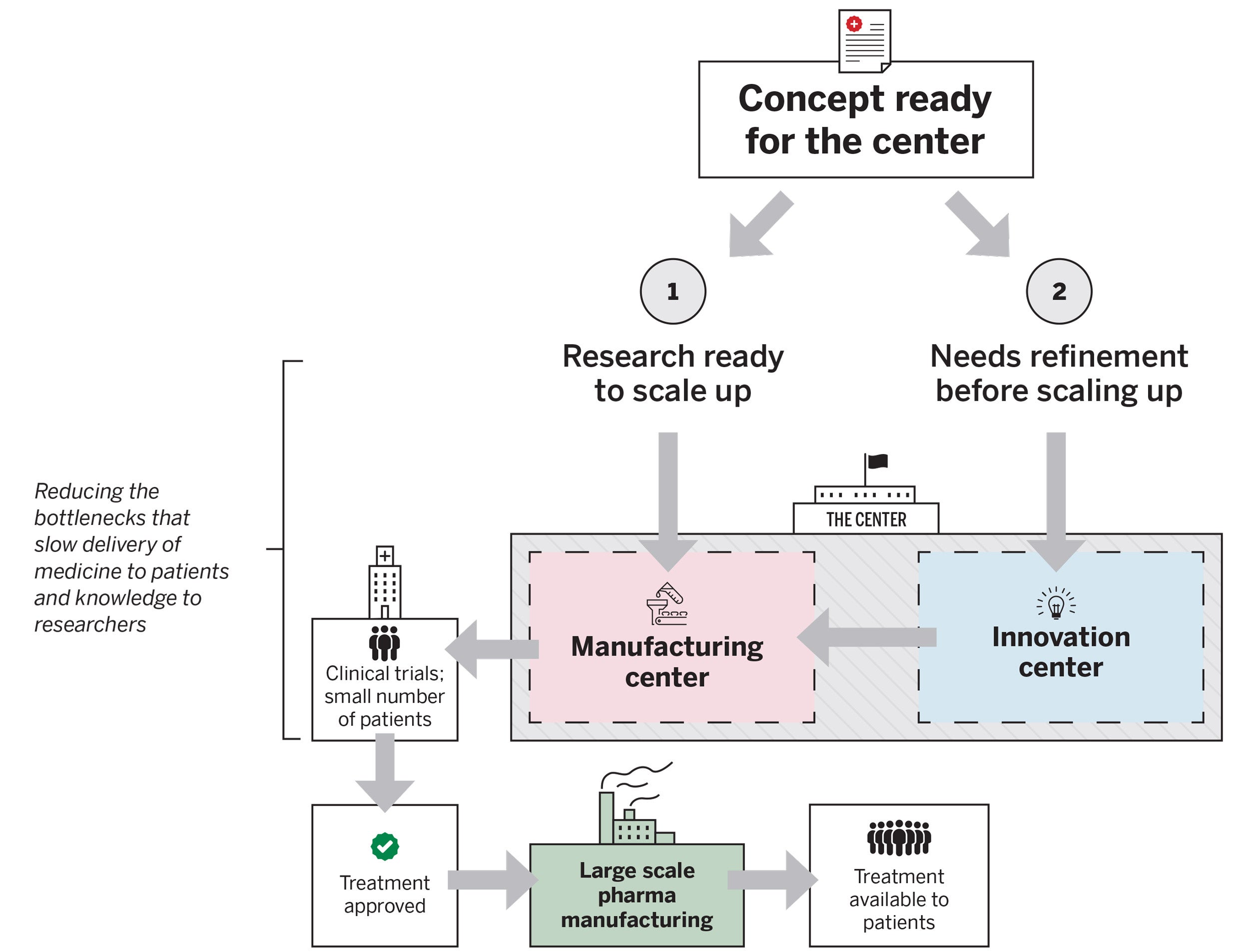 MIT Provost Martin A. Schmidt said sharing the risk among several institutions will not only make possible work that would be difficult for a single institution to tackle, it will also encourage collaboration that accelerates the process of moving discoveries from lab to patient.

“MIT researchers are developing innovative approaches to cell and gene therapy, designing new concepts for such biopharmaceutical medicines as well as new processes to manufacture these products and qualify them for clinical use,” Schmidt said. “A shared facility to de-risk this innovation, including production, will facilitate even stronger collaborations among local universities, hospitals, and companies — and ultimately, such a facility can help speed impact and access for patients. MIT appreciates Harvard’s lead in convening exploration of this opportunity for the Commonwealth.”

Richard McCullough, Harvard’s vice provost for research and professor of materials science and engineering, who also helped lead the project, said although the center’s activity will revolve around science and manufacturing, its true focus will be on patients.

“The center’s overarching goal will be improving patient care,” McCullough said. “This would occur both by speeding access to the essential, modified cells that patients in clinical trials await, and by fostering discoveries through collaborations within the center’s innovation space. The aim is that discoveries result in whole new treatments or improved application of existing treatments to provide relief to a wider universe of patients.”

Organized as a private nonprofit, the center will be supported by more than $50 million pledged by its partners. It will be staffed by a team of at least 40, experienced in the latest cell-manufacturing techniques and trained in the use of the latest equipment. Among its goals is disseminating badly needed skills into the Boston life-sciences workforce.

“We have to be sure that we are constantly feeding the industry with talented people who know the right things, so personally, I am very excited about education programs,” Ligner said. “Initiatives like [this center] are essential to advancing the industry because they help organizations build on one another’s advances. For example, the full potential of cell and gene therapies will only be realized if we collaborate to address challenges, such as manufacturing, improving access, accelerating innovation, tackling cost issues, and then sharing our learnings.”

The new center emerged from conversations with state officials, including Gov. Charlie Baker and Attorney General Maura Healey, and industry sector leaders about ways to bolster Massachusetts’ preeminence in life science research and medical innovation. Those conversations sparked a two-year consultation process at the invitation of Garber and Harvard Corporation Senior Fellow Bill Lee, that was coordinated with state officials and included representatives from industry, academia, venture capital, area hospitals, and government.

“Cell and gene therapies have the potential to revolutionize the global health system. … Recently, in Sweden, the first patient received cell therapy outside of a clinical trial. It’s the start of an incredible time in the industry and in human health.”

Called the Massachusetts Life Sciences Strategies Group, members reached out to regional experts beginning in 2017to discover what fields they considered most important and how best to support them. Cell and gene therapy rose to the top because of the considerable excitement generated by activity already going on, its potential to help patients, and its high potential for future growth and innovation. Also important were the opportunities to spread the high cost of these technologies across multiple institutions and, while so doing, capture the collaborative power of housing each player in the development chain within a single facility.

The center’s board of directors will be comprised of Harvard, MIT, and industry partners Fujifilm, Alexandria Real Estate Equities, and GE Healthcare Life Sciences. Other members will include Harvard-affiliated teaching hospitals Massachusetts General Hospital, Brigham and Women’s Hospital, Beth Israel Deaconess Medical Center, Boston Children’s Hospital, and the Dana-Farber Cancer Institute; as well as the Commonwealth of Massachusetts and life-sciences company MilliporeSigma.

“When you look at the constellation of players coming together, you really have the best universities and the best teaching hospitals and the best corporate players all supporting it,” McGuire said, “which I think is a great opportunity.”

The facility intends to provide researchers and emerging companies outside the consortium with access to excess material, though organizers said they expect it to be in high demand by center partners.

The center’s boost to the area’s cell and gene therapy endeavors comes early enough that it should help maintain leadership over places like California and China, which have made clear their interest in life-science research, McGuire said.

“I think getting this ‘early mover’ advantage is going to be huge [in] developing the technology and the know-how and, ultimately, the intellectual property around it,” McGuire said.

For Sharpe, the ultimate payoff will come from using cancer immunotherapy’s checkpoint blockade and other cell and gene therapies to save and improve lives.

“We are seeing long-term benefits in some patients who’ve received checkpoint blockade,” Sharpe said. “There are patients … who are more than a decade out and are melanoma-free. I think that it really has transformed patient care, quality of life, and longevity. So I’m optimistic that the more we learn, the more we’re going to be able to do to help patients.”