Luke Koblan sat at his desk, staring at some data. Excited but baffled, the grad student thought, there’s no way those numbers could be right. He shared the results with his boss, Professor David Liu, and today, that data has spurred a team of scientists from the Broad Institute of MIT and Harvard (including Koblan and Liu), the National Institutes of Health, and Vanderbilt University Medical Center to achieve an almost unbelievable leap for the CRISPR gene-editing tool known as base editing, moving the technology a critical step closer to being a treatment for progeria, a deadly premature aging disease.

Several hundred children worldwide live with the malady. In most cases, just one small error involving one of the four main bases, or building blocks, of DNA — a thymine (T) in place of a cytosine (C) at one position in just one copy of the lamin A gene in a cell nucleus — causes the body to produce a toxic protein known as progerin. Toddlers with the progeria develop at a normal intellectual pace but soon lose their hair and body fat, fail to grow, and develop wrinkled skin, osteoporosis, and atherosclerosis, a threat to healthy arteries. Most live to about 14 years old and die from a heart attack or stroke.

In a study published in Nature, Koblan, Liu, and the rest of the team used an adenine base-editing treatment in mice to successfully convert an impressive percentage of those errant Ts back to Cs in DNA, RNA, and protein, leading to a dramatic improvement in tissue health (including the heart) and lifespan — mice lived about 2½ times longer with just a single treatment and reached the start of what would be old age in normal, healthy mice. The first base editors were developed in Liu’s lab in 2016. 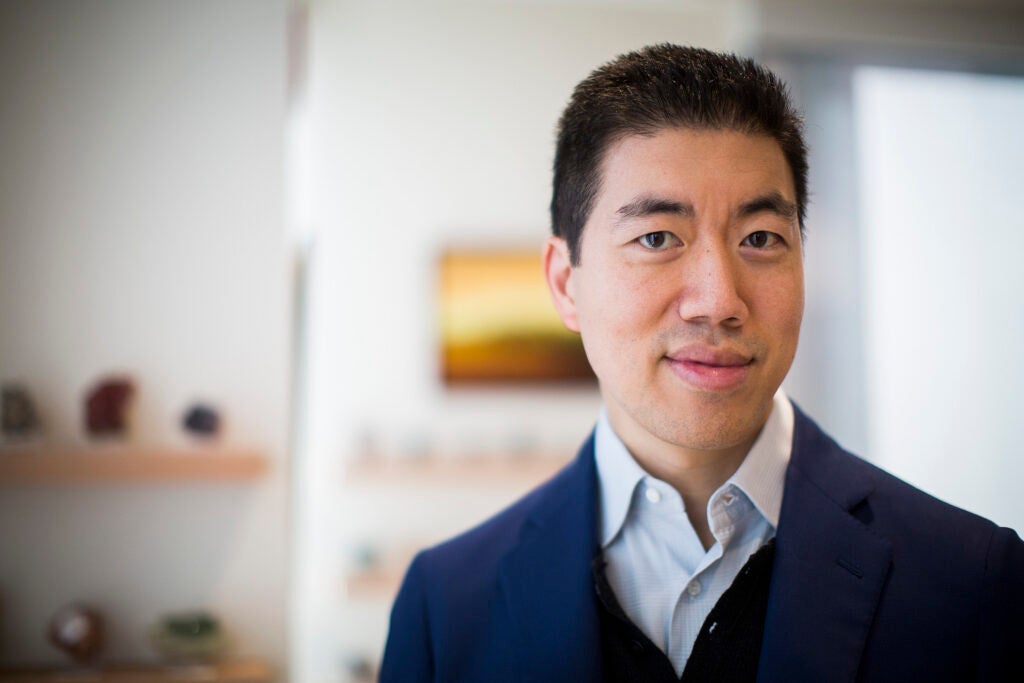 “This degree of lifespan extension in an animal model of progeria is, to our knowledge, unprecedented,” said Professor David Liu.

Because their effort proved so successful, the work not only offers a path to treat progeria, it provides a blueprint for testing novel gene-editing treatments for other genetic diseases like sickle cell anemia and muscular dystrophy.

“This degree of lifespan extension in an animal model of progeria is, to our knowledge, unprecedented,” said Liu, the Richard Merkin Professor and director of the Merkin Institute of Transformative Technologies in Healthcare at the Broad Institute, professor at Harvard University, and Howard Hughes Medical Institute investigator.

“To our knowledge, this work resulted in the strongest rescue of the symptoms of progeria by multiple measures,” he continued. “Five years ago, we were still finishing the development of the very first base editor. If you had told me then that within five years, a single dose of a base editor could address progeria in an animal at the DNA, RNA, protein, vascular pathology, and lifespan levels, I would have said, ‘There’s no way.’ It’s a real testament to the dedication of the team that made this work possible.”

Four years ago, when Koblan, the study’s first author and a Ph.D. candidate in the Graduate School of Arts and Sciences, started to tinker with base editors in progeria cells, he had no expectations. That’s why his original data, which launched the massive collaboration, was so surprising: It showed that their adenine base editor (a Liu lab invention) corrected about 70 percent of disease-causing mutations in the liver cells of a mouse model developed by Francis Collins, director of the National Institutes of Health (NIH), who also discovered the DNA mutation that causes progeria. When Liu saw the results, he asked Koblan if he could share the numbers with Collins. 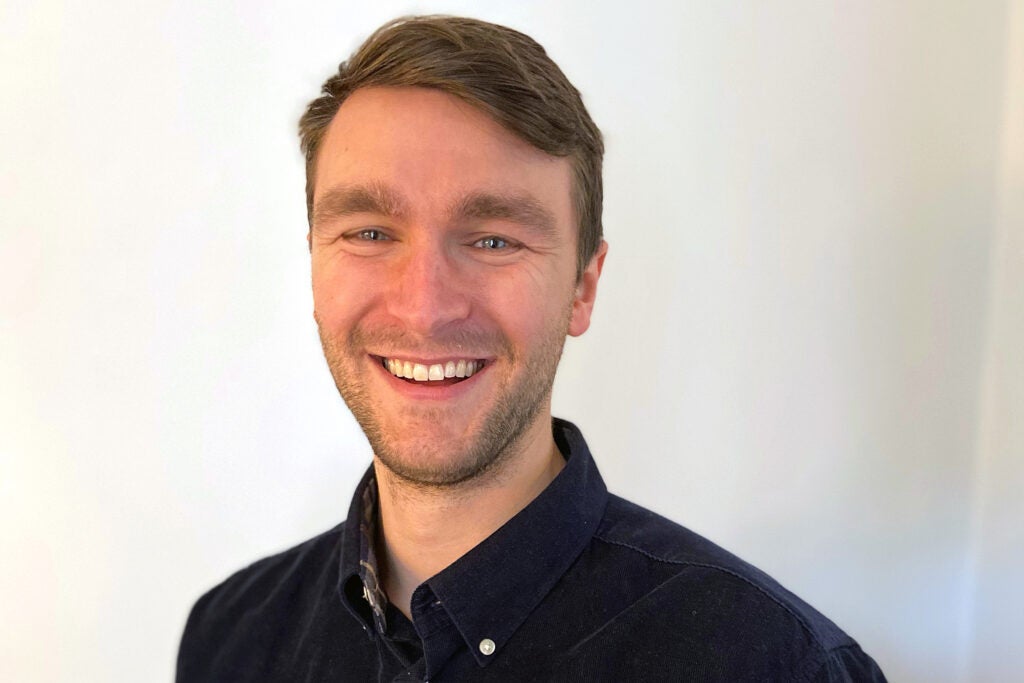 “One day it was kind of a rinky-dink operation ... Then, all of a sudden, the next day you’re collaborating with the director of the NIH. It exploded overnight,” said Luke Koblan, the study's first author.

Koblan said, “One day it was kind of a rinky-dink operation,” composed of him and two postdoctoral researchers at the Dana Farber Cancer Institute: Charles Lin, and Jonathan Brown, who is now an assistant professor of medicine in the Division of Cardiovascular Medicine at Vanderbilt University Medical Center and a corresponding author on the paper. “Then, all of a sudden, the next day you’re collaborating with the director of the NIH. It exploded overnight.”

The NIH team, which included co-first author Michael Erdos, reran Koblan and Brown’s experiment and got the same promising results. “That was a nice sanity check,” said Koblan. From there, they teamed up with the Progeria Research Foundation to obtain skin cells from kids with progeria. The treatment corrected the mutation in an astonishing 90 percent of the cultured cells with no detected off-targeting (meaning, the gene editor did not cause any detected unwanted edits, an important sign for the safety of a potential new treatment). Though very promising, the team still needed to verify the treatment would work in live animals. Using the same progeria mouse model (in which mice carry two copies of the human lamin A gene variant that causes the disease), they delivered the treatment either three or 14 days after birth (roughly analogous in maturation level to 1 and 5 years of age in a human).

When mice with progeria reach six months old, the disease has already caused rapid deterioration of blood vessels. Healthy cells die off; scar tissue builds up. But mice treated with the team’s base editor saw almost 100 percent restoration of these especially vulnerable cells. “The aorta cross-sections were statistically indistinguishable from a wild-type mouse,” said Koblan. Untreated mice lived an average of 215 days (just over seven months); treated mice lived a median of 510 (just under 18 months) — a 137 percent extension of their lifespan.

Since about half of all known disease-causing mutations are single-letter errors (like progeria), other scientists could use this study as a guide to hone base editors to cure more genetic disorders in humans.

“But mice certainly aren’t humans,” said Collins in an NIH Director’s Blog post about the study’s results. While he’s hopeful the technique could lead to a cure for progeria, more work needs to be done to ensure the treatment is safe for humans.

While the team observed no significant off-target edits, some of the longest-living mice developed liver tumors, a known complication when using adeno-associated viruses (AAVs) to deliver genes into mice that are allowed to live into old age. The side effect has yet to be observed in humans, said Koblan, but to be safe, they hope to eliminate the complication in mice prior to human use. Also, some base editors discovered after the study’s launch have higher editing efficiencies and could be effective with lower doses of the virus. Ongoing and future studies will search for the most ideal base editor, treatment timing, and viral delivery method while monitoring where the editor goes and how it performs once injected.

Still, some scientists are eager to start clinical trials soon. “We will find a way to get this done for these kids,” said Leslie Gordon, a Brown University physician whose son Sam died from progeria, in an article in Science. Gordon co-founded the Progeria Research Foundation, which provided the skin cells for the study.

Koblan, who met Gordon mid-project, said her work is an important reminder to other scientists that the patient is central. “Once you see the consequences of what you work on, you get a better perspective on what you’re doing and why you’re doing it,” he said. It’s no longer just an intellectual challenge, it’s, ‘I have to get this right, and if I don’t, there are consequences.’”